Gallup Glyphosate Weedkiller Product Range is a popular choice for killing weeds, but they can be harmful to your health. Some research has shown that glyphosate may cause cancer and other health problems.

As a bonus, we give you several tips to use this weedkiller with proven results and no fear of harming either your plants or wildlife. 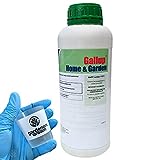 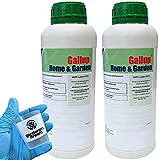 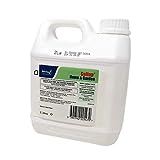 What is Gallup Glyphosate Weedkiller and how does it work?

This powerful weedkilling formula is intended for commercial use, such as preparing fields for planting or rebuilding overgrown structures. It is, however, so effective that it can even be utilised in residential gardening. It’s effective against both perennial and annual weeds, as well as robust growths like ivy.

Made by Barclays Chemical Manufacturing Limited in Dublin, Gallup is a professional-grade weedkiller designed to eliminate even the toughest weeds. It’s a potent glyphosate combination that may be used on weeds like hogweed and Japanese knotweed, as well as over very wide areas like farm fields.

Gallup Glyphosate Weedkiller is a broad-spectrum herbicide that kills weeds and grasses by inhibiting the production of a key enzyme necessary for plant growth. Glyphosate works by targeting an enzyme found in plants, but not in animals or humans, which means it is relatively non-toxic to mammals.

When applied to leaves, glyphosate is absorbed and moves through the plant to the growing tips and roots, where it inhibits the enzyme. This prevents the plant from being able to produce certain proteins that are essential for growth. As a result, the plant dies within 7-14 days.

Glyphosate weedkillers are some of the most popular herbicides in the world, but there is a lot of controversy around them.

Some people say that glyphosate weedkillers are safe to use, while others claim that they are harmful to both humans and the environment.

When applying any pesticide it is important that you wear the correct PPE and always use gloves when handling any weedkiller.

The safety of glyphosate, a common weedkiller, has been the subject of much debate in recent years. Some studies have suggested that it may be linked to cancer, while other research has found no such connection.

The conflicting classification of glyphosate’s cancer risk highlights the difficulty in assessing the safety of chemicals. In general, it is hard to know if a chemical will cause cancer because we are exposed to so many different chemicals in our everyday lives. It is also difficult to study the long-term effects of glyphosate exposure, as cancer can take years or even decades to develop.

It is important to remember that just because a chemical is classified as carcinogenic, it does not mean that it will definitely cause cancer. The IARC classification is based on the strength of the evidence, not the magnitude of the risk. For example, an IARC working group may classify a chemical as “probably carcinogenic” if there is limited evidence in humans but strong evidence in animals. This does not mean that the chemical will definitely cause cancer in humans, but that there is a greater chance that it could do so.

The bottom line is that the safety of glyphosate weedkillers is still uncertain. If you are concerned about the risks, you can take steps to minimize your exposure by wearing gloves and protective clothing when using these products. You can also choose to use alternative weedkillers that do not contain glyphosate.

What does Gallup glyphosate weedkiller kill?

Some of the weeds it kills include:

Who can use it and when should it be used?

Glyphosate is now the standard weedkiller; just make it a little more concentrated for difficult perennials. It is absorbed by the plant through the leaves and carried all the way down to the roots. For the next two weeks, no results will be seen. If the plant is very old and has a lot of roots, you may require a second spray.

How to mix Gallup Glyphosate Weedkiller

Tip 1: use a drop of washing up liquid to break down the water surface tension and thereby allow the leaves to absorb the weedkiller more effectively.

Tip 2: Spray a piece of tissue paper and place it within a sandwich bag. Pop this over the weed and seal it off. Protects your plants close by and is less harmful to the environment and wildlife alike.

Tip 3: Best time to spray your weeds is in the evening after a dry day. This will allow the weeds to soak in as much of the weedkiller as possible and increase its efficacy.

Tip 4: For best results, wait until the weeds have enough leaves to absorb the spray sufficiently.

Tip 5: Replanting and cultivation can occur after 7 days of treating an area once the weeds are visibly dead.

What are the benefits of using Gallup Glyphosate Weedkiller over other weedkillers on the market today?

Some of the benefits of using Gallup Glyphosate Weedkiller include its effectiveness at killing a variety of weeds, its low toxicity to animals and humans, and its relatively low cost. Glyphosate weedkillers are also generally considered to be safe for the environment when used as directed.

Where to buy Gallup Glyphosate Weedkiller

For price and value, there is no better weedkiller on the market and whilst there are becoming more non-glyphosate alternatives available only you can decide on how severe your weed problem is and the necessary degree of intention to remove it can be applied.

When you need total vegetation control, glyphosate weed killers should be employed. It is not the quickest to work but once it takes effect, it kills the weeds perfectly.

The Gallup Glyphosate range of weedkillers offers a great solution to the wide range of weeds that can be found on your property. Being capable of destroying the most stubborn of weeds it is considered one of the best weedkillers available on the market today.